Three teenage thugs have been named after beating to death a Big Issue seller who would not give them cigarettes.

Jimmy Ayres, 15, Craig Real and Warren Crago, both 17, attacked homeless Ralph Millward and dumped his body in bushes. They then boasted to friends they did it ‘for a laugh’.
The three gang members, who live on a notorious estate in Poole, Dorset, were convicted of manslaughter on Friday after a five-week trial at Winchester Crown Court.
Baby-faced killers: Craig Real and Warren Crago, who were 16 at the time of the attack, and Jimmy Ayres, who was 14, all punched and kicked Big Issue seller Ralph Millward to death
The jury took just two hours to agree on the guilty verdict.

izz: Um, where the hell are the parents of these kids? Clearly these kids were trouble for quite some time. Hello parents?


The boys can be identified after Judge Guy Boney said their actions were so ‘frankly appalling’ that it was in the public interest to know what they had done.
Mr Millward, 41, was a wellknown figure in the Westbourne area of Bournemouth, sleeping rough outside Marks and Spencer.
He had previously given cigarettes to one of the young thugs, the court heard. On the evening of May 7 last year, Ayres, Real and Crago had been drinking large quantities of cider at a friend’s flat.
When they ran out of cigarettes they went in search of Mr Millward but he refused to hand over any tobacco.
They then brutally punched and stamped on him. Mr Millward was left for dead with ten fractured ribs, a ruptured spleen and bleeding to the brain. After the attack, Crago and Real returned with a shopping trolley to continue the assault. 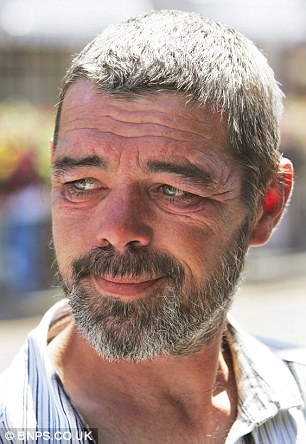 Brutal attack: Ralph Millward, a Big Issue seller, was kicked and punched to death by the boys in quiet Bournemouth suburb
Mr Millward’s body was discovered under the trolley in nearby bushes early the next day by two outreach workers.
Tim Mousley QC, prosecuting, said Mr Millward was powerless to protect himself from his attackers.
‘The violence used was overwhelmingly more than was needed to rob him of his tobacco,’ he said.
The youths are members of a notorious street gang in Poole called the Bourne Estate Boiz. Neighbours said they fear leaving their homes because of the gang, and in particular because of Real.
One neighbour, who asked not to be named for fear of reprisals, said: ‘If there is ever any trouble round here it is because of Craig.
‘He throws eggs at my house and breaks into our garden shed to steal things. My daughter was beaten up by him and pushed up against a wall. We told the police but they did nothing. She is now too scared to go out alone.’
The boys attended Rossmore Community College in Poole.
One schoolmate said: ‘It is a relief they won’t be at school any more. You really had to watch what you said around them and where you looked. They were always drunk or stoned so you didn’t know what they would do to you.
‘It just wasn’t worth getting in their way or all the Bourne Estate Boiz would be round at your door that evening.’
Westbourne residents were shocked by Mr Millward’s death and hundreds attended a memorial service for him.
Ayres, Real and Crago will be sentenced on June 30.